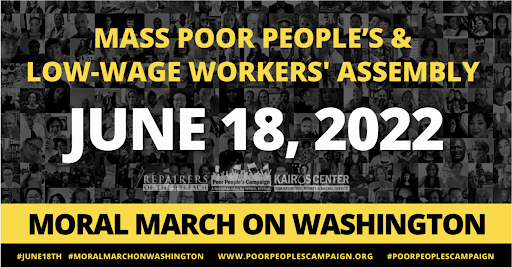 Get on the New York bus to the June 18th Poor People’s And Low-Wage Workers Assembly and Moral March On Washington.

New York is joining people from across the nation to gather in Washington, DC for the June 18th Poor People’s and Low-Wage Workers Assembly and Moral March On Washington. We will come together after months of mobilizing and organizing for this declaration by poor and low-income people and our moral allies to say that this system is killing ALL of us and we can’t…we won’t…we refuse to be silent anymore!

Saturday, June 18 departure times and locations in New York state are listed below. We will be returning in the late evening on June 18. We encourage all who are able to donate to cover the cost of their seat ($75). Lunch will be provided. Proof of vaccination will be required.

Join Us! Register now to reserve your seat!