From its origins during the French and Indian War, as a place of worship for the growing numbers of Scots-Irish immigrants to the present and its broad array of community outreach programs, First Presbyterian Church has played a prominent role in the history of the city, the state and the nation.

The Presbyterian Church of Albany was founded in 1763. Lord Jeffery Amherst, Commander-in-Chief of the British forces in America, granted the “use of a forage house near Fort Orange” as a place of worship. This 18th-century hay barn was the first meetinghouse of the Presbyterian founders. The first ministers were technically missionaries who also served the growing number of Scottish settlers throughout Albany County.

The first sanctuary was constructed on Beaver Street, between Hudson and Grand Streets. A simple timber frame building “of respectable size, though not of a elegant appearance, it was painted red and stood fronting the east.” It was built at a cost of about $7,000. The records of the Synod of New York for 1770 indicate that “an application was made on behalf of the Presbyterian Church of Albany…reporting that they are deeply in debt and praying that the Synod would recommend them to the assistance of charitable and well disposed persons within their bounds.”

Because many of the church’s members were newcomers who inherently were British sympathizers, the Albany Presbyterian Church suspended operations during the Revolutionary War. Occasional services were held during the war years, but no records have been found. It has been documented that a small group of congregants melted down lead from the church windows to make musket balls for the Continental Army. The army also made use of an iron stove from the Presbyterian meetinghouse.

Independent of any British connection, the Presbyterian church reopened again in 1784 making it Albany’s fourth permanent denomination. Its first postwar minister was John McDonald. Two years into his tenure, 116 communicates “partook of the Lord’s Supper.” In 1793, McDonald claimed that almost 30% of the city’s inhabitants belonged to the Presbyterian denomination. 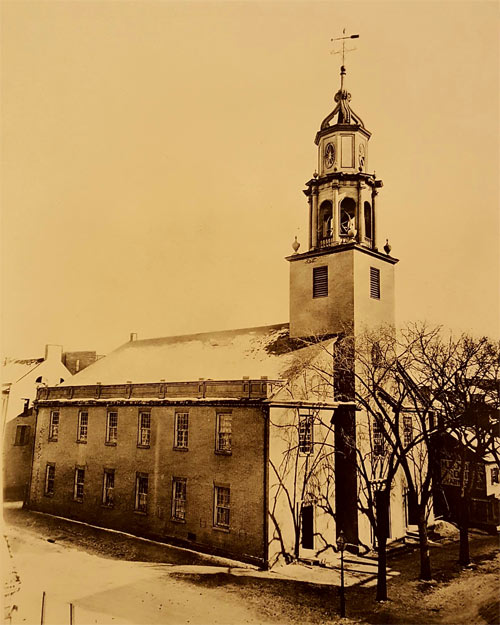 With a large number of American Calvinists flocking to the new State Capital and joining the congregation, a second edifice was erected in 1796 on what is now the corner of South Pearl and Beaver Streets. It was a traditional New England style church with a prominent white steeple. Alexander Hamilton, John Jay and Aaron Burr attended the church and contributed to funding the second building.

In 1802, Eliphalet Nott (inventor, educational pioneer and long-time President of Union College) was installed as minister of First Presbyterian. He took a prominent position as a preacher and attracted a growing audience with his well-crafted sermons. Upon the death of Alexander Hamilton in 1804, Nott delivered a powerful sermon condemning the practice of dueling. It had a profound influence in curtailing the custom and has been recognized to this day as a work of great oratory.

The Presbyterian Church was the first to organize a permanent Sabbath (Sunday) School in Albany. It was organized in 1816 and has survived uninterrupted until the present.

The second building was enlarged and its interior remodeled in 1831. At this time, it was considered “the most elegantly finished church in Albany.” 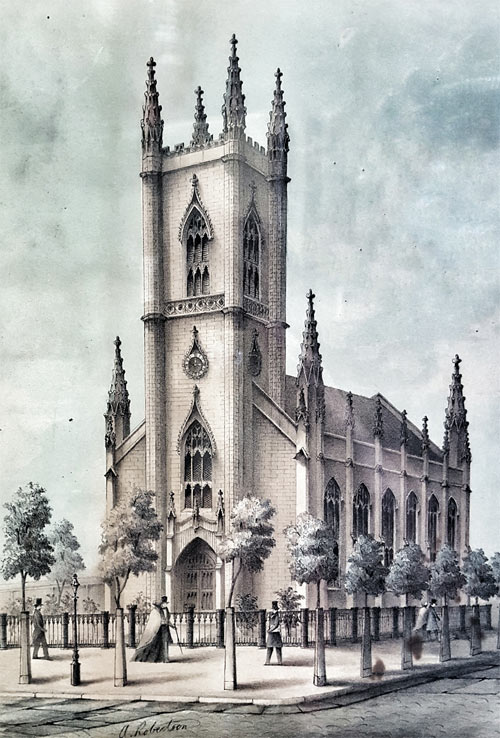 During worship, “precentors” would lead the congregation in reading and singing lines from the Psalms. In 1830, an actual choir was established to “stand and sing with musical instruments to assist their voice in keeping tone and time.” The choir was accompanied by violins and flutes.

As the congregation grew larger, a lot was purchased on the corner of Hudson and Philip Streets upon which to build a third church edifice in 1847. The Gothic Revival style was patterned after the First Presbyterian Church of New York. Opened to the public on March 10th, 1850, the sanctuary was “filled to capacity and large numbers of people were unable to gain admittance.”

Albany continued to expand westward as fashionable neighborhoods developed around the newly designed Washington Park. First Presbyterian began to look for a new location within close proximity to where its congregation resided. The present building was constructed in 1882 – 84 on the corner of State and Willett Streets.

1882 was a “watershed year for Albany architecture as the Romanesque Revival style was sweeping the city.” Washington Park was nearly finished and properties facing this great expanse were at a premium. The Presbyterians bought a prominent corner lot and hired New York City architect J. Cleveland Cady. He was known not only for his churches, but also for the American Museum of Natural History and his many buildings at Yale University and Williams College. Cady chose Henry Hobson Richardson’s Builder Orlando Whitney Norcross and his trademark sandstone for the building.

A Presbyterian, Cady designed churches in the spirit of the English “dissenting chapel” rather than the Catholic and Anglican tradition of cruciform plans. In 1897, critic Montgomery Schuyler praised “the dignity and churchliness” of Cady’s convenient, theater-like plans. Here in Albany, as in his other Presbyterian churches throughout the Northeast, Cady “integrated the social needs of the church with the sanctuary.” The adjacent Assembly Hall was originally separated by sliding doors that were opened for large services, making the two spaces one.

The church is known for its stained-glass windows. The two walls of windows in the sanctuary, each with five arched panels and three medallions “form an interesting juxtaposition of the work of the competing New York City studios of Louis Comfort Tiffany and Frederick Symetz Lamb.” The Tiffany window, installed in 1915 “forms a continuous scene of an exquisite lake landscape.” The Lamb windows, installed the same year, are more traditional, with scenes of the life of Christ in the panels. When lighted at night, the windows can be seen from State and Willett Streets. 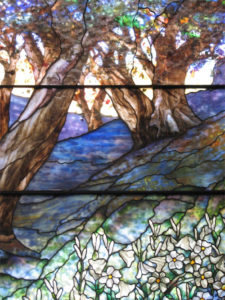 In Assembly Hall, there are three more Tiffany windows on the south wall. In the center arch is a magnificent Adirondack view of Lake Luzerne (1914), the first work by Tiffany installed in the building. It memorializes a young missionary, Alice McElroy Kingsbury, who died the year before in Turkey. Twelve years later, her mother, Mrs. James McElroy, gave a second window depicting the local scientific 19th-century figure Joseph Henry teaching his Albany Academy students about the principles of electromagnetic induction. The third Tiffany window, of Christ blessing the children, was given by Dr. Albert van der Veer in 1928 in memory of his wife and their three children who died in childhood.

The most comprehensive published resource is J. McCluskey Blayney, History of the First Presbyterian Church of Albany (Albany 1877).