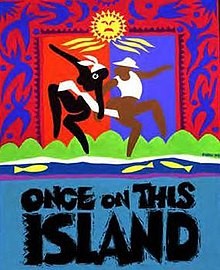 Once on this Island Jr. is a fun musical, with a splash of Caribbean music; but it is so much more.  This musical is about inclusion and acceptance, love and sacrifice, social, economic, gender and racial discrimination.  The original story of The Little Mermaid, written by Hans Christian Andersen, was transformed into My Love, My Love, by Trinidadian novelist, Rosa Guy, and later adapted by Lynn Ahrens to become the musical, Once on this Island.

Historians presume that Hans Christian Andersen was gay or bisexual, partly because Andersen wrote intimate letters to his friend, Collin.  Collin was unable to return Andersen’s feelings and after Collin married, Andersen escaped to an island, where he wrote the tale he would later send to Collin: a fairytale about a mermaid who didn’t belong.

Rosa Guy’s retelling of The Little Mermaid is also a tragic love story of a beautiful peasant girl who devotes herself to an aristocratic young man. His upper-class family feels that the girl’s skin is too dark and her family too poor for a boy destined for power and wealth.  Lynn Ahrens adds another layer to the plot by populating the island with the Beauxhomme family (light skinned descendants of rich French colonial landowners and the indigenous people) and the dark skinned people who are the poor peasants who work for and live far away from the Beauxhomme family.

Heavy subject matter presented in a delightful way by a cast of young people and guest artists.  Mark your calendar for Sunday, March 8, noon; right after second service.